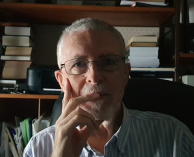 Ed Crutchley was born in Cambridge, England, in 1950. He has worked for over forty years in manufacturing, mostly in France and the United States, where he managed factories, worked in innovation, and was a consultant. His non-fiction includes a book about patents, of which he has several himself, and his grandfather’s diaries from 1930s Australia. His novels, six so far, revolve around escapades with streaks of surrealism. He is married, has one son, and lives with his wife in Kent, England.